It does not print solid metal directly, but instead accurately positions a catalyst throughout a polymer object wherever surface metal will later be needed.

The process is built around UV-curable resin printing, where a 3d solid is built in 2d layers by UV-patterning thin (tens of μm) layers of liquid resin, which makes the UV-exposed resin solid, and leaves it attached to the previous layer.

Instead of printing a whole object in one go, the object in this case is built from two precursor liquid resins, one normal and one doped with palladium ions. When the resin has to be swapped, which happens many times while printing a complex part with this process, the growing object is washed to remove traces of the just-used resin, which ever it is.

Once finished, the object is immersed in electrode-less copper (or nickel) plating solution, which is catalysed into metallic copper on the surface only where palladium ions are present.

“The research team manufactured a variety of parts with complex topologies to demonstrate the manufacturing capabilities of the proposed technique,” according to Waseda University. “These parts had complex structures including microporous and tiny hollow structures, the smallest of which was 40μm. The metal patterns were very specific and could be precisely controlled.” 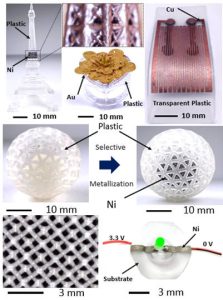 (left) included printing a double-sided 3d copper circuit and a nickel conductors on a complex curved surface to power an LED.

The work is published in ACS Applied Materials & Interfaces as ‘New metal–plastic hybrid additive manufacturing for precise fabrication of arbitrary metal patterns on external and even internal surfaces of 3d plastic structures‘.